HHLab officially opens its doors on Friday 27th March with an avantgarde music performance in the gallery. Rafael Vargas-Bernard will play modular sinth with  11 [HellHeaven] Miami Showroom’s artistic Director Marco Guglielmi Reimmortal.
Born in 1979 in Puerto Rico, Rafael Vargas-Bernard is a visual artist, an experimental musician, and a performer within digital art and new media. In 2018 Vargas-Bernard moved to Miami where he co-directed the Mana Contemporary Miami 777 Mall art complex and community. Currently, he is the resident artist for the FilmGate Interactive Gallery.

Rafael is an expert in modular synthesis also known as “spaghetti sinth”, due to the characteristic tangle of colored cables connecting a series of assembled modules. These connections allow an almost infinite possibility to generate and modulate random sequences of sounds. Rafael uses this form of expressive freedom to investigate the potential effects of “noise” between chaos and order.

HHLab is every Friday night at 11 [HH] Art Gallery.

December Focus was on:

We’re glad to announce CRYPTO EXPERT FOR THE ART MARKET.
The brand new 11 [HH] department for expertise and brokerage in blockchain and cryptocurrency for the art market.

May Focus was on:

Cryptocurrencies have recently gained enormous popularity amongst the general public. With each passing day, more and more companies are radically accepting crypto currencies in their payment systems, paving way for an economic revolution. However, the average consumer’s understanding of what are also known as cryptocurrencies is limited.
It’s not my intention to deep dive into what a cryptocurrency is or how a blockchain works. There are many financial analysts for that. As an art dealer, the most relevant question for me is: what do cryptocurrencies have to do with the art world?

ART FOR BREATH is a global live-streaming charity auction whose aim is purchasing respiratory devices for as many hospitals on the front line in the fight against coronavirus. Follow the live broadcast from the artist’s studio online every day and see the art work(s) from birth to conclusion.

The live stream from the artists’ studios will take place on YouTube Channel “Art4breath” and on Instagram #Art4breath.

November Focus was on:

After being awarded in 2018 as Best International Exhibitor in Red Dot Miami, this year 11 [HH] Art Gallery will join the Miami Art Week in SCOPE from 03 to 08 December.
SCOPE is a critically acclaimed art shows that extend beyond the ordinary, and is the most renowned side event of Art Basel Miami. Celebrating its 19th edition, SCOPE Miami Beach returns to its bespoke pavilion on the sands of Ocean Drive.

In its 300 ft booth 11 [HH] Art Gallery will be presenting “MEGAGONG”, the new concept of the Italian visual artist and sound designer Marco Guglielmi Reimmortal. This gigantic work (about 19 x 9 ft) follows and extends the series of the resonating Walls and engage the visitors in an experience which will involve in an emotional and personalized approach.

As a Special Guest, AIR ILLUSION will be presenting “LOVE SEAT”, an exclusive creation for SCOPE Miami Beach. Its an amazing sofa mirror polished; mahogany top with a clear finish. 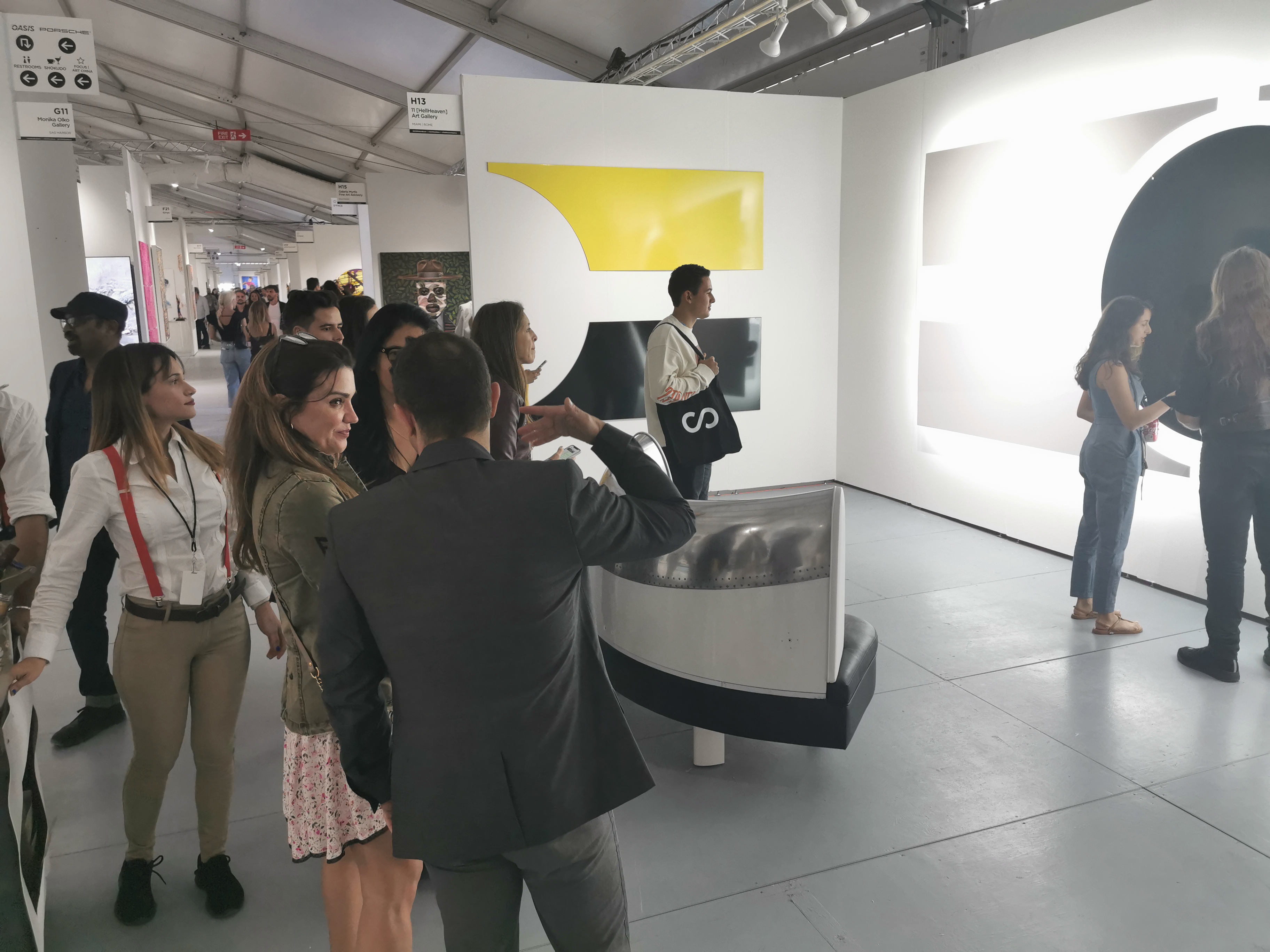 AirIllusion “LOVE SEAT”
AIR ILLUSION is a Design Manufacturing & Consulting Firm. They create custom aviation themed spaces and functional furniture from replica or vintage aircraft parts. Bob Verna, owner of AIR ILLUSION, started flying with a Top Flight Balsa Wood glider. That led to a Piper Cub, which led to a Piper Tri-Pacer and so on. Many flight hours later he diverted his flying time to preserving his passion. As a Master Cabinet Maker, Electrical Engineer, General Contractor, Inventor and with his Extensive Experience in Projects of Engineering and Design, he created a different means to continue his love of flying.

Join us in BOOTH H13

October Focus was on:

The starting point is an investigation on the infinite formal and chromatic possibilities offered by wall surfaces.
A wall becomes a field of dynamic forces where the multiplication of points of view takes place, up to the denial of the very sense of sight in the latest series MONO, DUO and STELLAR previewed in 2019 at MACRO (Museo Arte Contemporanea Roma).

These three-dimensional works lie between sculpture and installation. The backlight system is specifically conceived to create a peculiar ‘suction’ effect, the optical illusion of a perceptive void at the center of the vision.

March Focus was on: 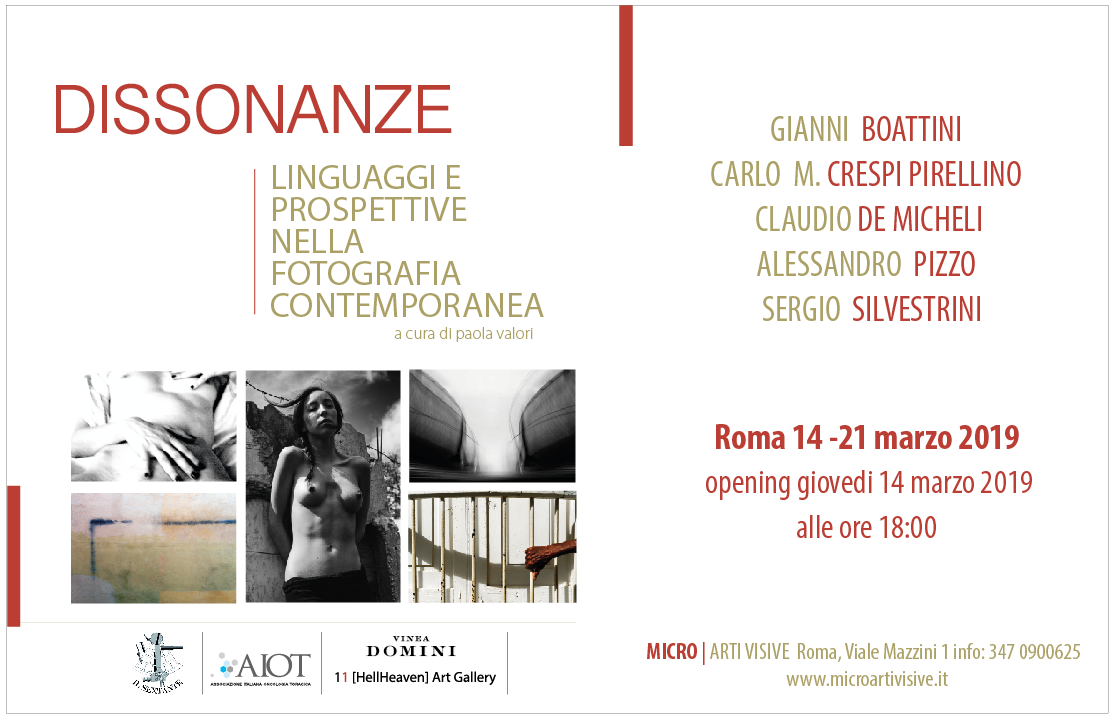 February Focus was on:

Discover this stunning artist, whose ‘curse’ (as he says) of being affected by Asperger syndrome gifted him with one of the most sensitive and out-of-the-box talent of his generation.

January Focus was on:

Expressionism is one of the main currents of art in the later 19th and the 20th cent. referring to a number of German artists, as well as Austrian, French, and Russian ones, who became active in the years before World War.
These exceptional masterpieces all come from a Swiss private collection, for the very first time in Italy.

December Focus was on: 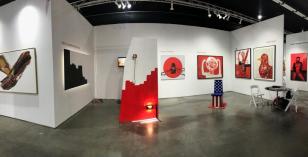 November Focus was on: 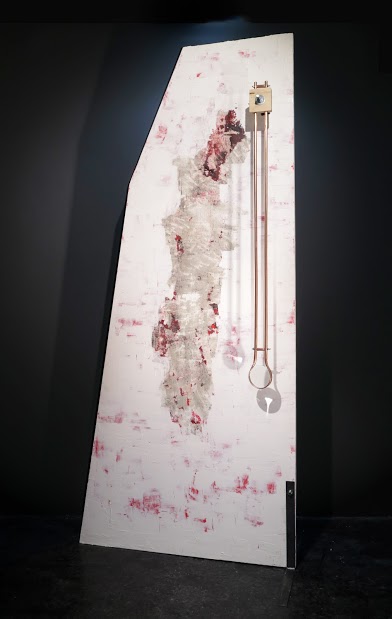 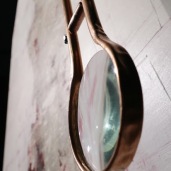 October Focus was on:

Two conceptual artists. A live performance. A point of view: yours.
This is ‘P.O.V.’ [Point of Views], the new exhibition in 11 [HH] Art Gallery.

P.O.V. [Point of Views] is a Selection of works by Sergio Silvestrini and Marco Guglielmi Reimmortal, whose installation will be realized on-site in the gallery during the opening of the show. The artwork will be one of his ‘Walls‘, the new concept by Marco Guglielmi Reimmortal after the ‘Sonic Tree‘ series, concomitantly exposed in Venice, 16. Biennale Architettura 2018.
His live performance will take place on the Opening day, 06 October, from 11:00 a.m. till dusk.

Sergio Silvestrini is a photographer and conceptual artist. He plays with reality and duplicates of reality, further duplicated by photographic representation. 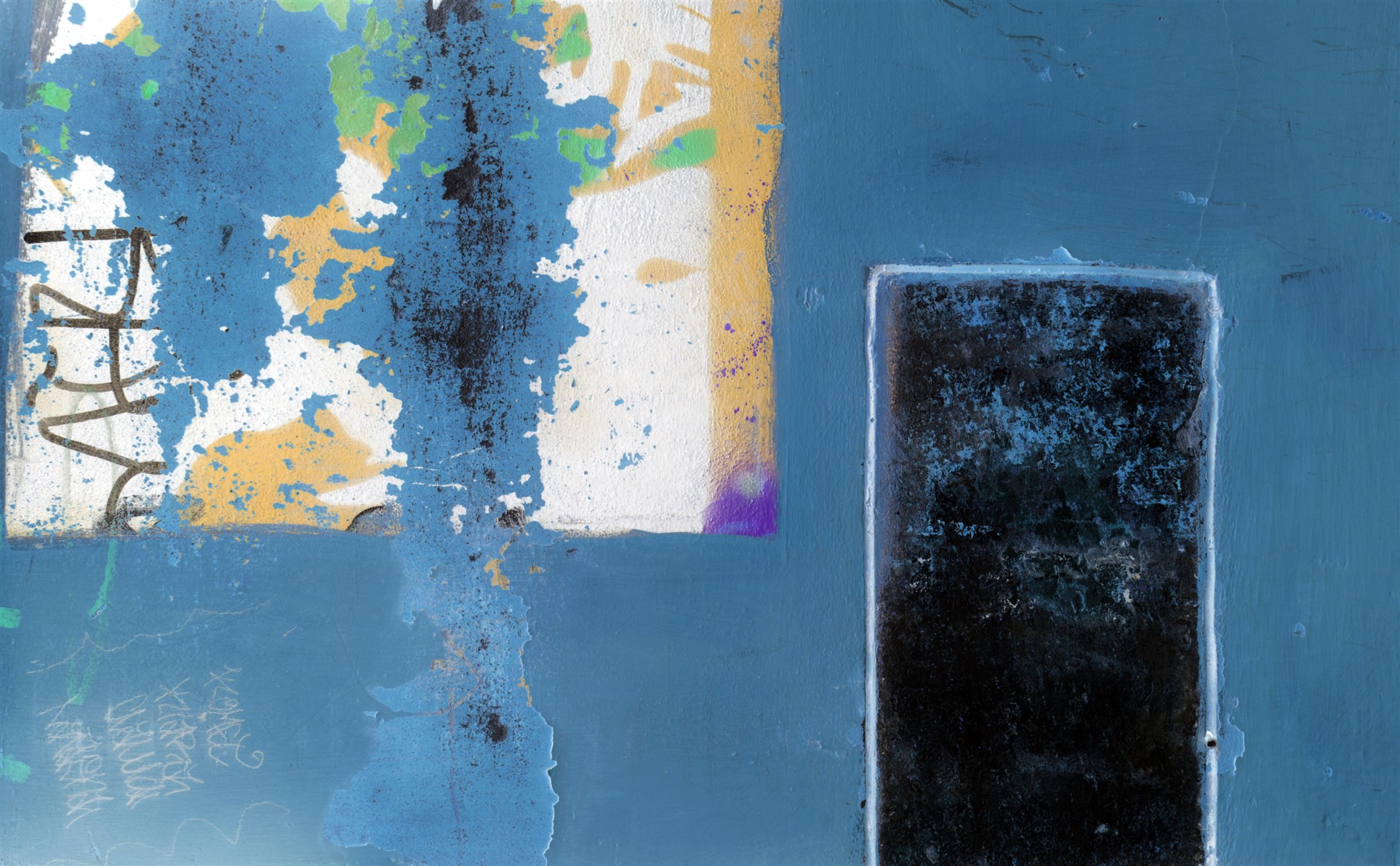 September Focus was on:

A rare collection. The gratest historical masters of informal abstractism in Italy after the second world war, in dialogue with a contemporary special guest. 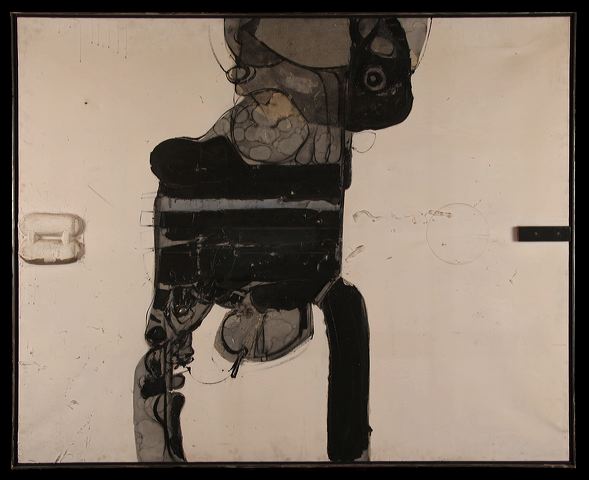 July Focus was on:

11 [HH] is celebrating the finissage of ‘Simbolismo intimo (Intimate symbolism)’ with a literary reading. We’re delighted to present the book: ‘Decoratori dell’Agonia’, in collaboration with Edizione del Giano, within the seminar ‘Il simbolismo oggi: crisi a confronto’. Curated by Antonio Marvasi, director of the critic magazine ‘L’Opinabile’.

May Focus was on:

See the original photographs the artist Marco Guglielmi Reimmortal took on April, 2018 in the ancient village of Amatrice (Italy) almost entirely ruined by an earthquake in 2016. 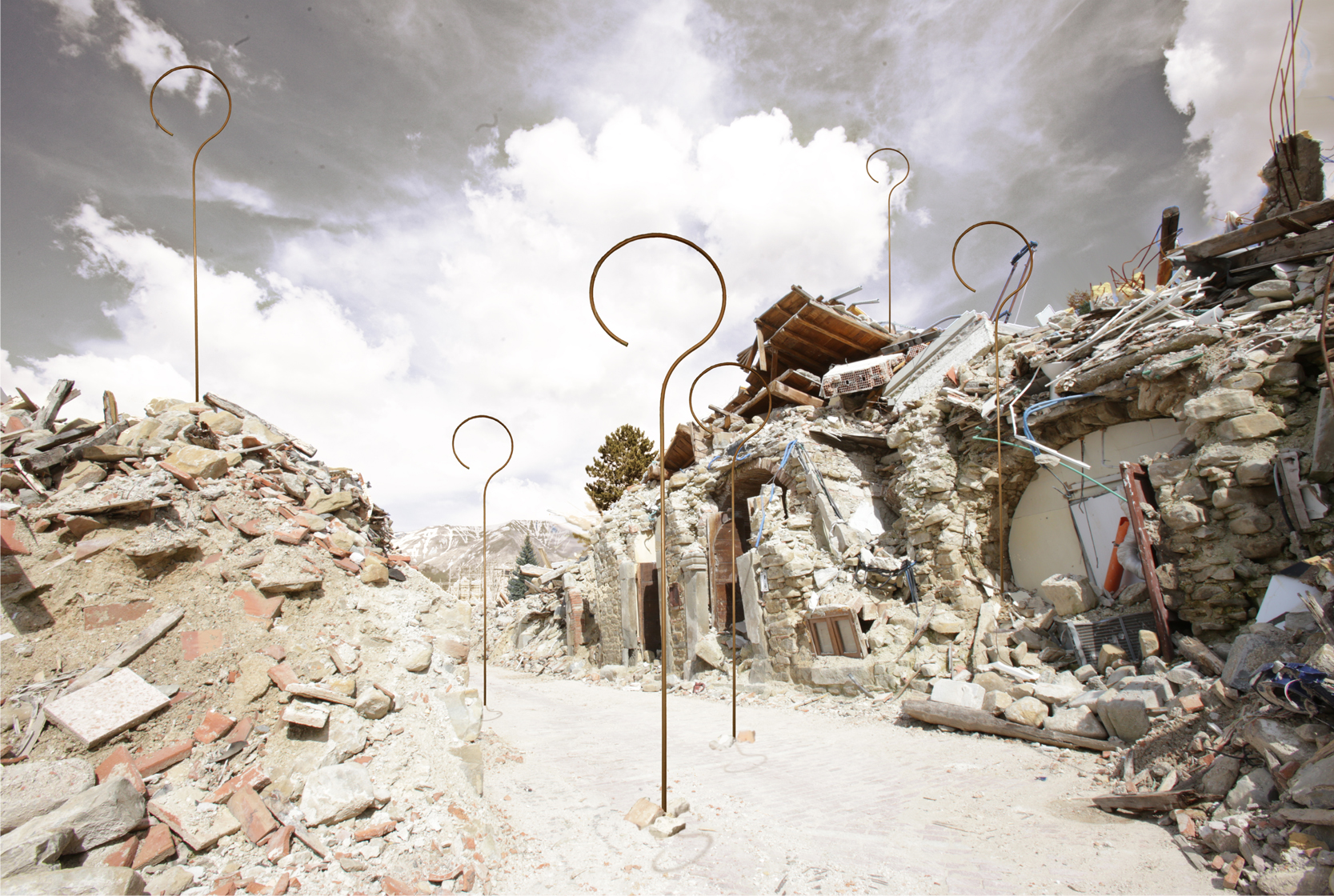 These pictures were made as a preparatory study of the installation Operazione Dimmi Amatrice’ which is the iconic symbol of ‘Borghi of Italy – #NO(F)EARTHQUAKE’, a collateral event of the 16th International Architecture Exhibition – BIENNALE DI VENEZIA. One of them is the front cover of the official catalog. The installation is being exposed in Venice, ‘Giardini della Biennale’, from 26th may to 25th November 2018, while the preparatory photographs are proposed on exclusive sale for Artsy concomitantly with Biennale in the same range of dates.

The structures shaped as question marks are the emblem of Marco Guglielmi Reimmortal’s new cycle of artworks starting from ‘Foresta Dimmi (TellMe Forest)’, a site-specific installation for the Venetian Church of Misericordia in November 2017 during Biennale finissage week. The copper question marks (‘Dimmies’ or ‘TellMes’ in English) are the urgency of an incessant question about the “why-of-things”, or the reason why all things made by man fatally share the same destiny of obsolescence and oblivion.

EACH PHOTOGRAPH IS A UNIQUE WORK: the artist will print it as a one and only chromogenic print. No other prints will be ever released or authorized by the artist. (*)

Artists say “NHO” to child abuse.
A remote village in India is starting the change.

“NHO To Child Abuse” is a Global Art Campaign founded by two contemporary artists, ROMANHO and Bansri Chavda, in order to create awareness about sensitives issues concerning childhood in the most disadvantaged countries.

11 [HH] Art Gallery is proud to support the project.

March Focus was on:

What is Trance-Sonic Painting (TSP)?

TSP Trance-Sonic Painting is a performance in which, driven solely by sound, the artist becomes a medium able to make visible on canvas the sensations aroused by sonic vibrations.

A sound oscillation (a certain type of waveform) induces a hypnotic trance similar to that provoked by mantras. In this state of consciousness the artist transposes the sound to the bidimensionality of the canvas, from which a series of definite images and signs begin to emerge.

Authorized Licensee
The Swiss Register
No. IT000126